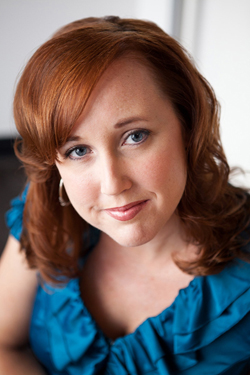 Emily Starr’s road to entrepreneurship began with a simple request from her school principal, “Tell me how you use technology in your classroom.” After thinking about it, Emily realized she wasn’t using technology, and decided to do something about it.

Emily was a fourth grade teacher at Ekstrand Elementary School in DeWitt, Iowa. In the wake of ‘No Child Left Behind’ and high stakes testing, her school began implementing school-wide reading and math focus lessons. These short 10-15 minute daily mini-lessons focused on specific reading and math skills regularly taught in her fourth grade classroom and assessed on the Iowa Tests of Basic Skills.

Emily started talking to other teachers and realized that they weren’t using technology, either. Looking around her school for technology that she could use, Emily found one math software CD that could be used, but no reading skills software. She turned to the Internet and found a game and a visual to support one of her lessons, but nothing else. She realized she hadn’t been using technology to support her curriculum because software CDs are expensive and become obsolete quickly, the technology wasn’t readily available, and she didn’t have the time to do extensive searches to find it.

Out of her frustration came the idea that developed into StarrMatica Learning Systems, an online resource for grade 3-6 students, teachers and parents. StarrMatica is sold to schools on an annual per-student subscription, allowing lessons to be accessed from any computer with Internet access. This allows students to access the lessons in the classroom, in the library, or at home. Each lesson is designed to be an interactive, educational experience for students as well as a unique teaching tool and resource for teachers and parents. All lessons are tied to state and national standards.

Emily knew what she wanted her system to look like, but she had no idea how to turn her idea into a business, so she turned to the Eastern Iowa Small Business Development Center (SBDC) for help. She enrolled in “Boot Camp for Entrepreneurs”, an eight hour course offered by the SBDC that covers a broad range of entrepreneurial, financing, and planning topics. After completing the course, Emily began weekly sessions with the center’s director, Ann Hutchinson, to implement her plan, receiving advice on business formation, intellectual property protection, financing, and management. Emily cites the SBDC as being a “critical catalyst in her transition from teacher to entrepreneur.” She adds, “Without their help, I wouldn’t have started my business.”

“I don’t think I’ve ever counseled an entrepreneur who was so driven to succeed,” says Ann. “The fact that Emily is a great teacher has made her a great student. She knows where she wants to go and she is determined to succeed.” In addition to her individual counseling sessions, the SBDC coordinated focus groups for Emily and helped her put together an advisory board.

Development of StarrMatica Learning Systems has been a formidable task requiring years of development. As StarrMatica’s president, Emily has managed six content contributors as well as all aspects of business planning, computer programming, capital acquisition, advertising, website development, voice recording, marketing, and sales. Formal marketing of the program was rolled out in the summer of 2007. Development of the product was completed in 2008. Sales have quadrupled in the past year. Emily has been a presenter at numerous state educational conferences and has recently signed with a reseller network of educational software and content, offering her nationwide exposure to the elementary school network. She is also in discussions with several hardware makers to provide content for a variety of systems. In 2010, Emily hired her first full-time employee as National Sales Manager.

In 2010, Emily was awarded the Technology Association of Iowa’s prestigious Prometheus Award for Innovation in Education, and StarrMatica was named a District Administration Magazine Top 100 Product of the Year. Emily was a finalist in the John Pappajohn Business Plan competition and a presenter at the Iowa Venture Capital Conference in 2009. She was recently awarded $100,000 from the Iowa Department of Economic Development’s Demonstration Fund for marketing assistance. She was the morning keynote speaker at NAWBO-CI’s “Women Mean Business” Summit on March 3, 2011 in West Des Moines.

Emily continues to meet with the SBDC and gives the SBDC credit for where she is today. As she said at a presentation to the center’s Advisory Board, “I wouldn’t be standing here today if it weren’t for the SBDC.”

Highlights from Emily’s special day at the State Capitol.

Emily was chosen as the Iowa SBDC’s 2010 Neal Smith Entrepreneur of the Year Award winner and was presented with an award at a ceremony at the State Capitol Building on February 23, 2011. For more information on this successful young entrepreneur and her company, visit www.starrmatica.com. 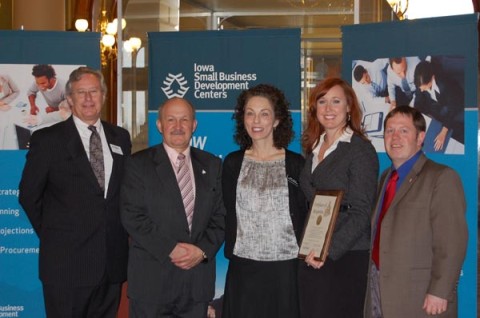 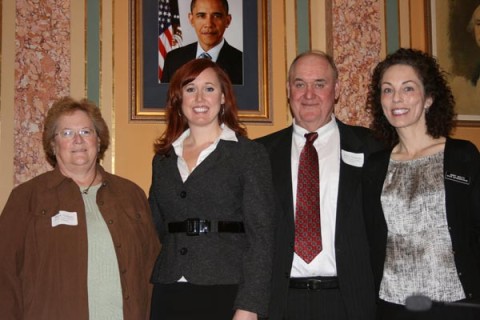 Emily Starr of Clinton was honored in the House Chamber for being the 2010 Neal Smith Entrepreneur of the Year Award winner. Pictured from left to right are: Barb Nelson, Emily Starr, Jerry Nelson and Representative Mary Wolfe. 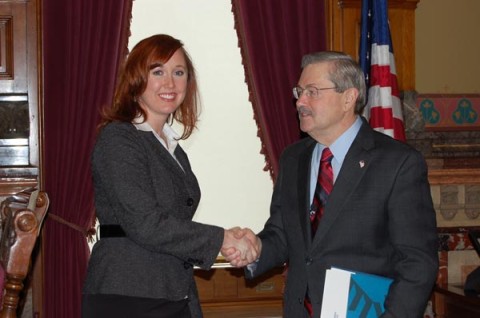 2010 Neal Smith Entrepreneur of the Year Award winner Emily Starr of Clinton was congratulated by Governor Terry Branstad in the Governor’s office on February 23, 2011.