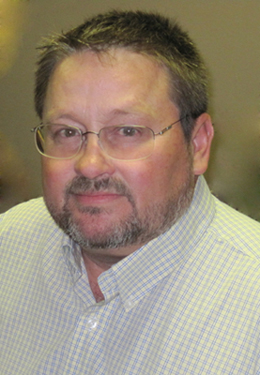 Entrepreneurship runs in Tim Greene’s family. Quality Machine of Iowa, Inc. grew out of a company started by Tim’s father, Bill. He started Quality Machine, Inc. in 1968 in Minneapolis, Minnesota and Tim worked at the company while growing up. The company survived through hard times but needed to diversify, so Bill persuaded Tim to start managing part of the business in 1983. When Bill died suddenly one year later, Tim took over the company at the age of 25. Scared but determined, Tim knew the industry was changing and that the company’s equipment and processes needed to be updated in order to compete, so he made changes that enabled the company to produce more efficiently.

In 1994 skilled labor was scarce in Minneapolis, plus the city’s zoning laws would not allow the company to increase its facilities. Therefore, Tim rented a facility in Denison, Iowa, which the company soon outgrew. With the help of a friend, Tim found a 45,000 square foot facility with room to grow in Audubon, Iowa in 1996. Most of the workforce from the Denison facility relocated to Audubon, and the Minnesota division was retained to support the Audubon operations. In 2004 Quality Machine, Inc. became Quality Machine of Iowa, Inc. by merging companies and making the Iowa division the company’s parent location.

Quality Machine of Iowa, Inc. is an advanced manufacturing business that does precision machining of metal parts. Its products include oxygen conversion devices, military munitions for tanks and flares for helicopters, components for OEM parts, hydraulic valves, service tools used for both agriculture and automotive equipment, and more. Some of the well-known brands that have parts made by Quality Machine of Iowa are Polaris, Toro, Arctic Cat, American Crane, Bobcat, Phillips Plastics, Alliant Tech System, Eaton, SPX Service Solutions (Owatonna Tool Co.), and Ballantine. The company indirectly exports much of its work as many of the finished products to which it contributes are purchased by customers in other countries.

Tim purchased additional equipment and expanded company services in order to maintain strength within the industry. The company added over three million dollars worth of equipment in the Audubon plant, and redesigned the production layout to be more efficient and more competitive globally. However, all of this was costly and Tim was soon looking for a solution to improve his cash flows.

Quality Machine of Iowa is in a tough industry; many machining companies folded in 2008-2009. The company is ISO 9001:2008 certified, which allows it to access higher levels of contracts and projects with the Department of Defense. Several of those projects have assisted our troops in their efforts overseas. The medical field has also benefited greatly from the company’s accuracy and commitment to quality. By diversifying, being committed to quality, and manufacturing through automation, the company has brought down the percentage of labor versus the product produced, thereby bringing back many parts that were previously sent out of the country to be produced.

Currently, Quality Machine of Iowa, Inc. has 55 full-time employees with an average weekly wage of $784 and annual sales of $7,000,000. The company has a diverse set of jobs that offer great working conditions and skills advancement opportunities. Tim and his employees have had a considerable economic impact on the area’s schools, businesses, and communities, plus the company pays thousands of dollars in local property taxes each year. Tim has built a company with a positive work culture and a strong commitment to excellence. Through continuous process improvements and with the dedication and hard work of Tim and his employees, it is no wonder that Quality Machine of Iowa, Inc. is one of the top precision machining companies in the industry.

And if Tim needs additional advice or business assistance, he will again contact the SBDC. Tim says, “In the rural environment, you have the values of those working for you that would be the envy of every corporation in the country. The SBDC helped us navigate in an area where most of the supporting businesses really weren’t familiar with what we did or had no idea of how they could be of assistance. SBDC had the contacts throughout the state and federal agencies that allowed us to position ourselves for steady growth and continuous improvement in a very positive environment to raise a family, have a great quality of life, and be a force in the worldwide manufacturing arena.”

Tim was further honored when he was chosen by the Small Business Administration as their 2012 Iowa Small Business Person of the Year. Along with being presented with his SBA award at the SMART Economic Development Conference in early May 2012, Tim traveled to Washington, DC in late May 2012 to compete in the national award competition and to network with award winners from other states.

Learn more about Quality Machine of Iowa, Inc.by visiting their website at www.qualitymachine.com.

Highlights from Tim’s special award day at the State Capitol. 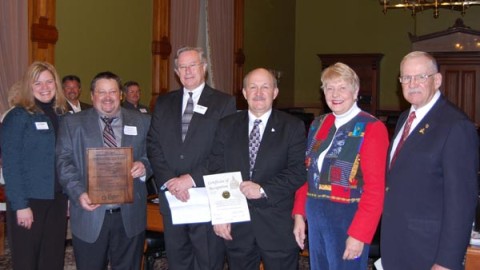 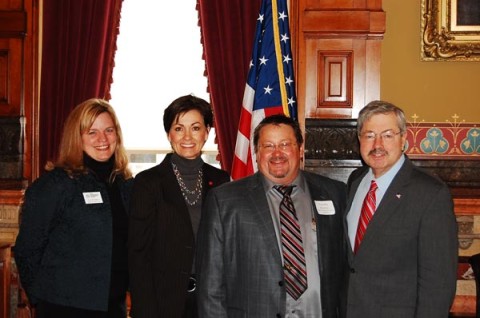