John Chadima was determined to be a business owner and was searching for the right venture to invest in when a friend suggested Firehouse Subs, a fast casual restaurant chain with a passion for hearty and flavorful food, heartfelt service, and public safety. The franchise’s history and practices were enticing to John who really believed in this product and company. John officially opened his Firehouse Subs restaurant in November of 2014.

“As I considered several different businesses, this one always rose to the top,” John says. “It was the real deal as far as people and products go.”

Firehouse Subs is a brand built on decades of fire and police service, steaming hot subs piled high with the highest quality meats and cheeses, and its commitment to saving lives through the creation of the Firehouse Subs Public Safety Foundation. Firehouse Subs has been recognized as a top fast casual restaurant in the United States numerous times, which John considers a great honor.

“When you see the results from the work that you have put in, that is certainly gratifying,” John says. “We have been quite a success and well received in Cedar Rapids.”

When John was just starting to research locations and logistics in August of 2013, he reached out to Paul Heath, director of the University of Iowa Small Business Development Center (SBDC), for business counseling. Together John and Paul put together a business plan complete with financial projections and later with concrete numbers. Paul was also able to assist with creating a budget and spreadsheets for the shop.

“Paul was very helpful in developing a business plan and fine tuning it when some of the numbers came to fruition,” John says. “He has done a really good job in assisting me.”

“In any successful business, people will say that the most important resource is your people and we’ve got good people here,” says John, who employs approximately 25 people including two full-time employees.

The Firehouse Subs franchise, as a whole, takes community involvement and service very seriously. As a chain that was founded by brothers and former firefighters Chris Sorensen and Robin Sorensen, each individual store works hard to develop relationships with their local public safety departments. They also run multiple programs in their restaurants to support the Firehouse Subs Public Safety Foundation, which is dedicated to improving the life-saving capabilities of first responders and public safety organizations in communities served by Firehouse Subs by providing funding, resources, and support.

John’s restaurant also strives to support different charities and organizations that line up with the brand’s beliefs. It also gives out free sub certificates to some local groups. When things become more regular around the restaurant, Firehouse Subs will join the local Chamber of Commerce.

“My family is well entrenched in Cedar Rapids and Eastern Iowa,” says John. “We certainly like to be involved in the community.”

Through local restaurant marketing, John visits other local businesses and shares the Firehouse Subs business concept. The shop also gains publicity through the local newspaper, over the radio, and via social media. The franchise just recently began running television advertisements, as well.

Iowa City, Iowa can look forward to gaining Firehouse Subs steaming hot subs in their communities in the coming years as John purchased the rights to a location in that area. He will also open up another restaurant in the Cedar Rapids community within two years. He will continue working with Paul to look for locations and to refine budgets to make those shops a reality.

For more information about this unique franchise and their location in Cedar Rapids, Iowa, visit the Firehouse Subs Collins Crossing Facebook page. 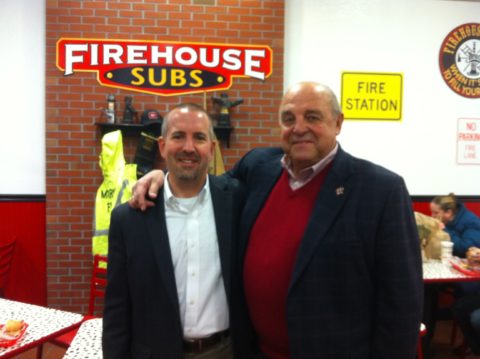