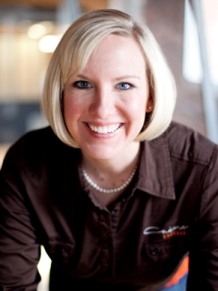 The Iowa Small Business Development Center for Mid Iowa assisted Christina Moffatt in developing her business plan, creating cash flow projections, and finding financing so she could start a bakery and then expand it into a bakery and dessert lounge.

Christina Moffatt turned her love of baking into a career. In August 2010 while still working full-time she opened Crème Cupcake as a home-based business. By January 2011 she gave up her day job at RDG Planning & Design and went full-time with her bakery. The home-based business started with an order for one dozen cupcakes and then quickly stepped up when the Bravo Greater Des Moines fundraiser ordered 1,400 cupcakes. That event convinced her to expand further.

In August 2012, after establishing an enthusiastic following for her gourmet goodies, Crème Cupcake + Dessert opened as a bakery and dessert lounge in Des Moines. This traditional daytime bakery became a full-service bar and chic spot to enjoy a post-theater/after-dinner dessert and matched cocktail in the evenings.

Christina came to the Small Business Development Center (SBDC) as a one person start-up out of her home bakery and has grown to a retail business with 26 employees in the past two years. The SBDC assisted Christina with her business plan, cash flow projections, advice on location and business planning, and helped her prepare for and obtain a loan.

Christina says, “I knew I was going to open a small business and I knew it was going to involve food. After taking a couple of classes from the Small Business Development Center, they helped me focus and find my niche with individualized counseling. From there they have helped me grow my business, which is already in its third location. The SBDC has been with me from the beginning.”

Christina makes all of her bakery items from scratch. She has an executive baker, pastry chef and a mixologist. The business is open during the day as a bakery and at nights as a dessert lounge, where dessert is paired with wine or cocktails created to go with specific desserts.

Christina has shared her success with others. She contacted Lindsey Reed, the owner of Topped Doughnuts in Ankeny and offered to add her gourmet doughnuts to the baked items that she offers, in order to get Lindsey’s products exposure in the Des Moines market and because she felt that the gourmet doughnuts would appeal to her customers. Lindsey in turn is advertising Crème Cupcake + Dessert at her Ankeny store.

Christina is an Ankeny native, has a business degree from Iowa State University, and is very active in her community. She was President of the Des Moines Downtown Chamber in 2011. She chaired the 2010 Greater Des Moines Leadership Institute’s ‘Give Back Des Moines’ collection, where she helped raise $93,000 in donations and received a ‘Challenging the Process and Leading the Way” award from the Greater Des Moines Leadership Institute. She is a part of the Ferscipe Society, a community visioning group for Des Moines. She is a member of the Women’s Reciprocity Group for sharing and helping other women grow. She is a speaker for many groups in the area including: Des Moines Area Community College students on “Following Your Passion, not a Paycheck”; Young Professionals; the Youth Leadership Initiative in Des Moines on helping young women to learn to follow their passion. 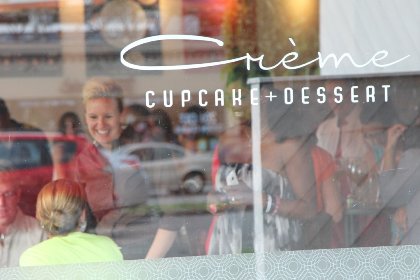 Because of her hard work, determination and amazing success, and her passion to help others and pass on her knowledge, Christina was chosen as the 2012 Deb Dalziel Woman Entrepreneur Achievement Award winner by the Iowa Small Business Development Center. She was honored at an award ceremony held on March 14, 2013 at the State Capitol. See below for fun pictures showing all that happened that day.

For more information on Crème Cupcake + Dessert, please visit www.cremecupcake.com or its Facebook page, or better yet, stop at the business at 543 28th Street in Des Moines and enjoy some of Christina’s gourmet cupcakes. 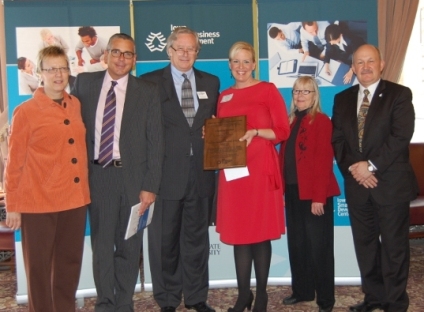 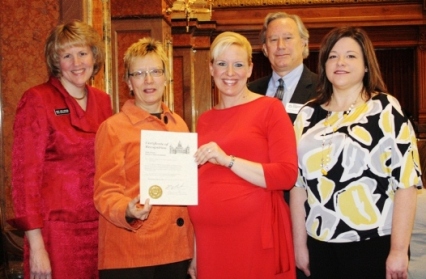 Senator Matt McCoy presented Christina Moffatt with an Iowa Senate Certificate of Recognition for her business success at the Iowa SBDC Reception on March 14, 2013 at the State Capitol. Christina was further recognized and congratulated by the entire Iowa Senate earlier the same day. 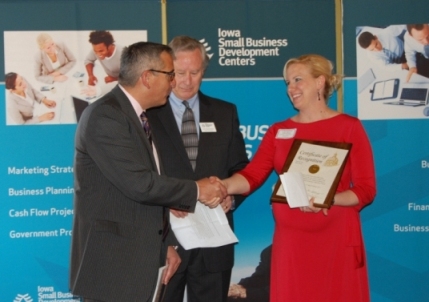 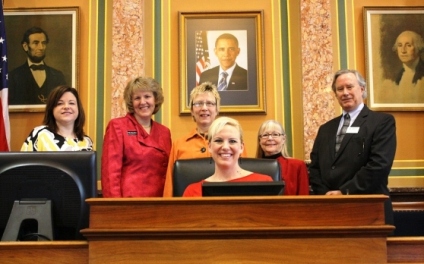 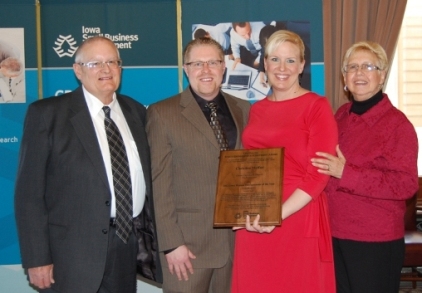