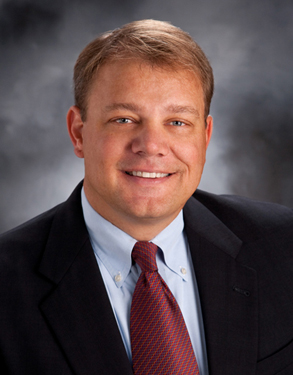 The Iowa Small Business Development Center at The University of Iowa assisted Chuck Dirks extensively with his energy efficient water treatment and tube cleaning systems business and continues to help him grow his company.

Charles (Chuck) Dirks grew up on a farm in Jones County and graduated from Anamosa High School. He joined the Army, served in the Gulf War as a pilot, and throughout his military career flew a number of different aircraft including the UH-60 Blackhawk. He then worked for Cessna Aircraft for several years before joining Rockwell Collins, where he worked as a principal marketing manager for the company’s Next Generation Avionics Program and its information management department. A chemist Chuck had worked with came across a company doing interesting work on energy efficiency technology in Israel, which is kind of the green technology center of the planet right now. Chuck was very interested so he licensed some of their technology and left Rockwell Collins to start his own business. Unfortunately, he started his company in 2009 during one of the most challenging economies in American history.

Chuck went to the Iowa Small Business Development Center (SBDC) at The University of Iowa in April 2010 for help with his business. Center Director Paul Heath first reviewed Chuck’s application for tenancy at The University of Iowa’s BioVentures Center, which was approved. Paul helped him identify potential private and government customers for the company’s technology. He then reviewed the company’s business plan and provided feedback, and assisted Chuck in completing a demonstration fund grant application.

Paul then introduced Chuck to The University of Iowa’s (1) Hygienic Lab for third party testing, (2) College of Engineering as a source of interns, and (3) Business Manager, who introduced Chuck to the facility management people at the University of Iowa Hospital and Clinics. Paul also referred Chuck to Iowa State University’s (1) Center for Industrial Research and Services (CIRAS) and its procurement outreach center, and (2) Institute for Physical Research and Technology (IPRT) for potential collaboration. The SBDC also provided feedback on CQM’s new website.

CQM Systems offers chemical-free water treatment and perpetual condenser tube cleaning systems. These systems work separately or together to dramatically improve HVAC and industrial water process efficiency. The company installs energy efficient systems in refineries, power plants and tall buildings around other mechanical equipment. CQM Systems’ products are as ‘green’ as water treatment gets and since they’re chemical-free, they are good for the environment. Companies who purchase the technology save water and energy, reduce maintenance, and extend the life of their capital equipment.

The new technology works but the performance specified seems too good to be true to many facility managers and, as a result, is a hard sell. In addition, many HVAC companies and chemical distributors are very resistant to the technology as it eliminates the need for chemicals, which are an ongoing source of revenue for these businesses.

In July 2012 the company celebrated its first installation at a power generation plant in Hibbing, Minnesota. The Hibbing Public Utilities Company installation was the first power generation application for CQM Systems. The systems are proving performance capacity in a very difficult environment. Prior to the CQM Systems installation, the company’s condensers would experience vacuum pressure degradation due to condenser fouling, as a result of bio fouling, lime, and silica accumulations. Since the ATCS and SRS installation, the Hibbing Public Utility Power Generation Plant has been operating successfully using no cooling water treatment chemicals and yet controlling scale, bio fouling and operating under less water utilization. 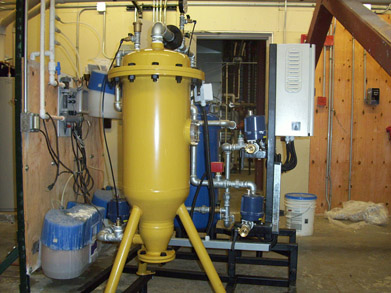 CQM Systems has found solid footing because of its superior products and its exceptional people. It has:

All of the company’s installed systems have operated exceptionally with no disruption in condenser or water treatment. Companies who have CQM products installed can enhance their LEED rating, plus improve regulatory compliance and reduce regulatory compliance expenses. In addition, CQM’s products have tremendous payback, typically under two years. It’s common for the systems to generate a 50 percent internal rate of return, which makes it easier to sell the product. And finally, the systems are designed for reliability; moving parts are minimized to prevent mechanical failure and produce world class performance.

CQM Systems is the exclusive representative in this country of its energy efficient water treatment products and is working on creating a strong partnership with the Israeli company it licensed its green technology from. The company is planning on starting manufacturing of its products in Cedar Rapids within two years. When manufacturing begins Chuck plans on hiring veterans for the work, especially those who have served in combat theaters.

Chuck is exuberant about the help he received from the SBDC, saying, “From the beginning of our relationship in 2010, the Iowa SBDC has worked to find contacts for our products, aided in our search for capital, worked to guide us through pitfalls, provided graduate assistants to aid in the successful development of our marketing case data, directed my company towards state and federal assistance mechanisms, helped in our technical position recruiting, and provided relationship bridges to key enablers in the state (government and commercial) that could help our enterprise. Without question, the SBDC has been an instrumental player in the success we have experienced to date.”

Chuck is very excited about his company’s future and the profound impact it stands to impart on the cleaner, healthier, and more prosperous world of tomorrow. The company’s patented products have already proven their value to hundreds of clients worldwide in close to 3,000 installations in 22 countries. Currently, the Iowa SBDC is assisting CQM Systems with developing a safety program.

UPDATE! Chuck was chosen as the 2012 Neal Smith Entrepreneur of the Year Award winner by the Iowa Small Business Development Center. The award is presented annually to an existing business owner that has been in business at least three years, has good prospects of continuing in business, and has been significantly assisted by an Iowa SBDC regional center. He was honored at an award ceremony held on March 14, 2013 at the State Capitol. Scroll down to see all the fun Chuck and his family had at the State Capitol that day!

Be sure to check out CQM Systems’ exciting green technology at www.cqmsystems.com. Chuck and his folks are working hard to reduce humanity’s carbon footprint and to conserve water, which has an immediate impact on everyone’s health and safety. Go Green! 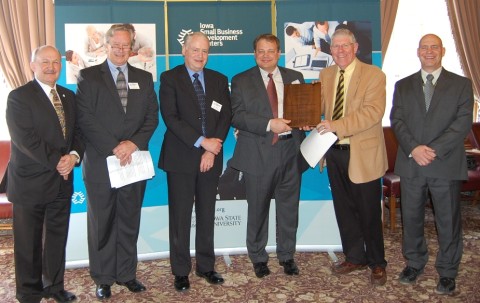 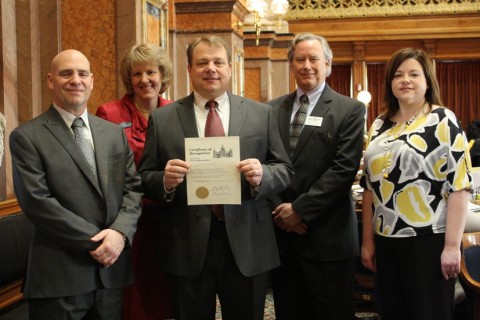 Senator Robert Dvorsky presented Chuck Dirks with an Iowa Senate Certificate of Recognition for his business success at the Iowa SBDC Reception on March 14, 2013 at the State Capitol. Chuck was further recognized and congratulated by the entire Iowa Senate earlier the same day. From left to right are: University of Iowa SBDC Regional Director Paul Heath, Chuck Dirks, Sen. Robert Dvorsky, and Rep. Dave Jacoby. 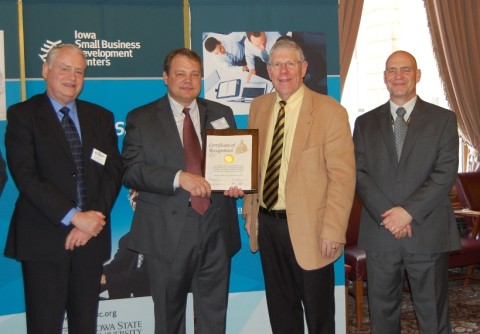 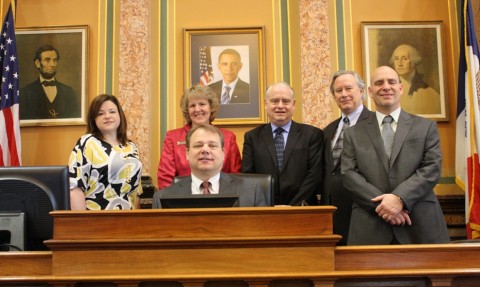 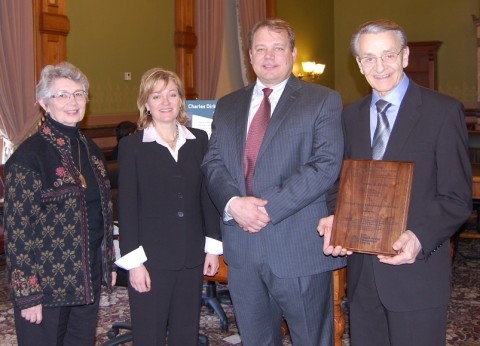