Shimkat, who’s been with the organization since May 2007, was nominated by her associates for the honor. She was honored at a special reception held during the America’s SBDC national fall conference in San Antonio, Texas on Sept. 24, 2010.

“This nomination by Lisa’s peers recognizes the outstanding job she has done for the business communities in the ten counties served by the North Central Iowa Small Business Development Center,” says Iowa SBDC State Director Jim Heckmann. “Lisa always works extremely hard for her clients and for our organization. Her dedication deserves this recognition.”

Jim Patton, Region 7 Education Director, Iowa State University Extension Office, Fort Dodge, adds, “Lisa is one of many dedicated staff of the Iowa SBDC. Her achievements are highlighted by her efforts through team work with Small Business Development Centers across the state. Lisa’s enthusiasm, imagination and energy are contagious. She is an outstanding professional deserving the Iowa SBDC 2010 State Star Award.” 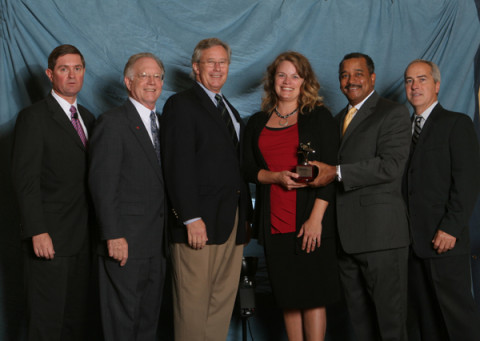