Nearly three years ago, Sandra Hendred visited a frozen yogurt shop in St. Louis, Missouri and became inspired by the idea of opening a frozen desserts shop in her community of Ottumwa, Iowa. After sharing the idea with her husband, Jeff, they began visiting yogurt shops in Iowa City and Des Moines, then decided to jump head first into business ownership.

Their shop, Polar Xpress, opened on February 14, 2015 with five self-serve machines offering 15 flavors and over 30 different topping choices. The business employs eight people part-time and is located in Ottumwa’s revitalized downtown area. “Our desire was to provide a healthy alternative to ice cream and a climate-controlled atmosphere where people can get together with friends and enjoy a frozen treat,” says Sandra.

Sandra was quick to take advantage of business services offered by the Indian Hills Small Business Development Center (SBDC) and SCORE. Bryan Ziegler, director of the Indian Hills SBDC, was able to help Sandra to get her business off the ground by helping her to create a business plan and calculate financial projections.

“I found Bryan to be very flexible in when he could meet with me,” Sandra says. “I work a full-time job, but he was very considerate of my time and made his schedule work for what was most convenient for me.” Bryan was also able to help Sandra fill out loan applications to gain funding. He also helped the couple to get their Quickbooks financial system set up.

“He is very knowledgeable in what he does and was patient with my lack of knowledge,” Sandra says. “I highly recommend working with him.”

The frozen desserts shop has seen plenty of success. Although the owners were disappointed to see cold and dreary weather on the day of the grand opening, they were thrilled to see the community come out and support the new business. According to Sandra, business has been steady ever since due to advertising over the radio, staying active on Facebook, and word-of-mouth.

“We were a little concerned about the community being accepting of frozen yogurts since we have multiple, established ice cream shops here,” says Sandra. “But the response has been really overwhelmingly good.”

A loyalty card program was implemented in the store and soon customers began returning with their cards full of ten punches to collect their free cup of frozen yogurt. Sandra is proud to have plenty of repeat customers and considers it a triumph to have been so well-received when introducing a new product to the town. In the future, the shop will expand its offerings to include a variety of frozen treats.

To learn more about this family-owned frozen yogurt shop, visit Polar Xpress on Facebook at https://www.facebook.com/polarxpressottumwa. 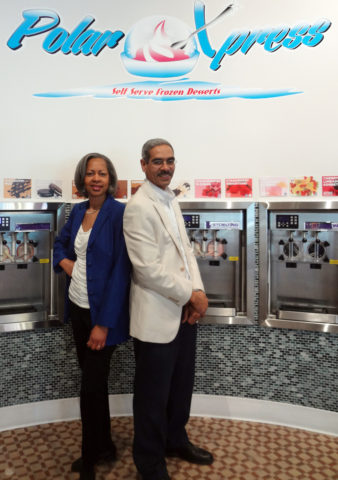