About two years ago, engineer and avid angler Greg Ferris came up with the idea for a personal watercraft that would be an alternative to fishing kayaks. Knowing that if he were to move forward with the idea as the basis of a business venture – whatever the business model might be – he was going to need access to capital, Greg developed a PowerPoint presentation for his banker. He didn’t realize it at the time, but that was his first pitch deck for what was to become The Fisherman’s Edge™. With his most recent pitch, Greg came in third in Entrefest and is continuing to move forward toward product launch.

The Fisherman’s Edge™ is a tri-hull personal watercraft that Greg designed to minimize the problems associated with kayak fishing and to maximize the advantages of that type of recreation. The problems with using kayaks for fishing include that it’s difficult to stand in a kayak, they can be uncomfortable, and they can weigh a lot for one person to carry to the water. The Fisherman’s Edge solves those problems by being designed for stability, offering the ability to adjust positions between sitting or standing, and for ease of transport from vehicle to water. As a result, it looks totally unlike anything else on the market and really is a new type of watercraft rather than an improved kayak. The Fisherman’s Edge™ will allow people to enjoy the maneuverability of a kayak and also the ability to sit or stand and carry their fishing gear as if in a small boat. 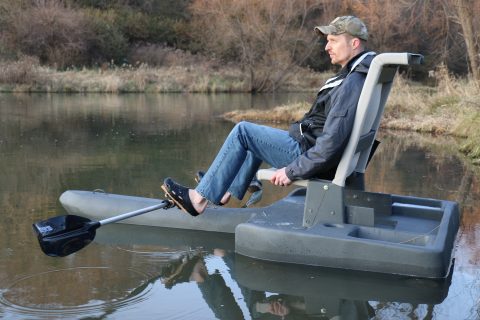 When Greg first met with his banker about the idea, he hadn’t given the idea public exposure and was not familiar with what it takes to launch an innovative business. His banker recommended that Greg meet with an Advisor from the local small business development center (SBDC). That was a transformative experience for Greg. He says that “the connection with the SBDC forced me outward in developing my business model” whereas previously he had been thinking primarily about what he would want to improve his fishing experiences.

School – an entrepreneurship development program (run by University of Iowa) for which Joel is an instructor. Venture School showed Greg the importance of going through the customer discovery process before launching his product. Something that Greg learned was that his expectation of being able to patent the product design and then easily license it to a manufacturer was unrealistic. Manufacturers wanted to see sales before incurring the cost of production and marketing the new product. This meant that the burden of getting the watercraft to market was going to rest on Greg. Though this realization was somewhat daunting, Greg is taking on the challenge because he is passionate about the advantages that this product will bring to serious fishermen.

Joel Youngs also referred Greg to a colleague at America’s SBDC Iowa, Laurie Pieper, to assist with commercialization of the new tech. Having constructed several prototypes, tested them, filing for and receiving a patent on his design, and having gotten input from anglers, retailers and manufacturers, Greg is now working with Laurie on his plan for taking The Fisherman’s Edge™ to market which he hopes will be sometime late 2020 or early 2021. Participation in Entrefest was an opportunity for Greg to continue refining his product pitch and to generate interest in the innovative watercraft before the product launch through public exposure.

Visit the Fisherman’s Edge at https://www.thefishermansedge.com or on Facebook.