The inspiration for EZ Manufacturing began 2013 when founder, Bruce Goddard, was struggling to find a way to prevent his net wrapping for livestock from freezing during the cold winter months. This predicament would eventually lead them to creating an innovative, rear-mounted bale processor. After two years of development and testing, Bruce had perfected his creation, The Bale Storm Processor.

The Bale Storm Processor is unique in that it is the only attachment style bale processor on the market. This inventive design not only makes the bedding process much faster and easier, it also eliminates the dangerous task of climbing under heavy bales on a skid steer. Add in the convenience of no longer having to struggle with frozen net wrap and the Bale Storm makes bedding easier, safer, and more economical than ever.

Bruce and his wife Connie began to explore the idea of manufacturing and marketing the Bale Storm Processor in 2015. As Connie says “It’s made a big difference for us. We could share this and make a difference for other farmers.” Bruce and Connie worked with the North Iowa Area SBDC and NIACC Pappajohn Center to help get their idea off the ground, and has been officially been licensed by Kelly Ryan Equipment to be manufactured and distributed on a larger scale. Their bale processor has also been named a finalist for the Innovation Award at the NIACC Pappajohn Center Gala.

With the help of the North Iowa SBDC and Regional director Brook Boehmler, EZ Manufacturing was able to turn their revolutionary idea into a successful business. Regional Director, Ms. Boehmler says, “Bruce and Connie are passionate about what they do and about sharing this invention to help other farmers. They have worked tirelessly to bring their dream to a reality.”

EZ Manufacturing’s relentless dedication to their product has revolutionized the bale processing marketing and their efforts have been recognized by the America’s SBDC Iowa by being awarded the September 2019 Business of the Month Award. 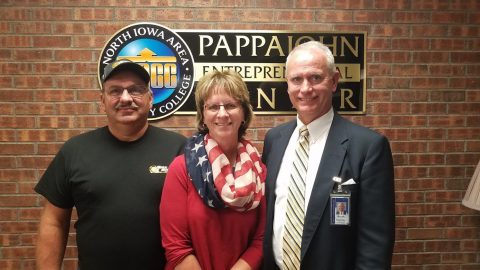 Visit EZ Manufacturing: http://balestorm.com/ or find them on Facebook.